Blame it on the genes..

It looks like it's official! Risk preferences are central to any model of human decision making but researchers are increasingly able to identify a link between our genetic makeup and our risk taking behaviour.

We've recognised for a long time that there are substantial differences in peoples willingness to trade off risk versus reward. Some of the variation in preferences can be explained by gender, race, culture, age, education and socioeconomic status but none of these differentiators were sufficient of themselves to explain the variation.  Research by Camelia Kuhnen and Joan Chiao of Northwestern University in the journal PLoS ONE, was able to link financial investment risk-taking to variations in certain genes that regulate chemicals in the brain.

In particular, it appears that those of use who enjoy risk taking, whether day-trading or motorcycling are likely to have specific differentes in our Dopamine Receptor D4 (DRD4) gene.  Without getting overly technical, it appears likely that 25% of the individual variation in risk taking can be explained by heritable differences.

It's early days yet of course, and risky to confuse cause with correlation but it appears that there is a definite genetic trait at play. For those of you who are really curious, you'll find more technical details in 'The 7R polymorphism in the dopamine receptor D4 gene (DRD4) is associated with financial risk taking in men' at Evolution and Human Behavior 30 (2009) 85–92.

For an easier read, New Scientist speculates that DRD4 could be responsible for the human migrated out of Africa around 50,000 years ago. Even to the point where DRD4 has moved us across the planet, thanks to a propensity for risk-taking and adventurousness. DRD4 comes in may shapes and forms whereby the 4R allele, is associated with being even-tempered, reflective and prudent. Ie. People who like to manage risk to be ALARP (as low as reasonably practicable).

Those of us more inclined to manage risk to be AHARP (as high as reasonably practicable) probably have the less common 7R and 2R versions, which by contrast have been linked to impulsive and exploratory behaviour, risk-taking and the ability to shrug off new situations. In short, the migrants with these versions were better able to deal with dangerous, fluctuating situations and more likely to survive and reproduce under those conditions.

So, before you have that risk conversation with your spouse or colleague at work, think about just how deep seated their risk attitude may in fact be.  Culture, perception, gender, education, age and many other factors are important but, in part at least, we can be pretty confident that it's hardwired. 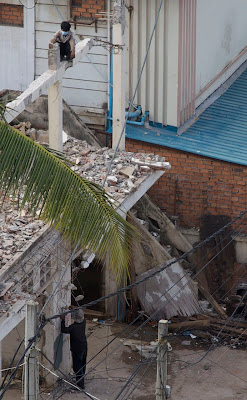