Following on from the previous blog entry, if we want to understand why otherwise knowledgeable health professionals should be so consistently ill-informed, consider this the results of some research by Gerd Gigerenzer. [iv] He first phrased the following question to HIV counselors in probabilities, as is fairly typical of the way statistics are presented to counselors and medical professionals.

Most people think that it is 99.99 percent or higher (including most of the counselors in the above study).  Now consider the same question worded differently.

From this latter question, you can easily see that the odds are roughly 1 in 2 or 50% that someone from a low-risk category who has a positive test result is actually HIV positive.

The reason that the above wording appears so much clearer is because our brain absorbs the information in a distinctly different way. Presenting the data using natural frequencies means that we are evaluating it using numbers that we can intuitively understand. It yields the same result but is much easier for our brains to calculate that result.   The difference between these two ways is most easily seen in an illustration. Presenting the data in a complex formula produces the right answer but is anything but intuitive. 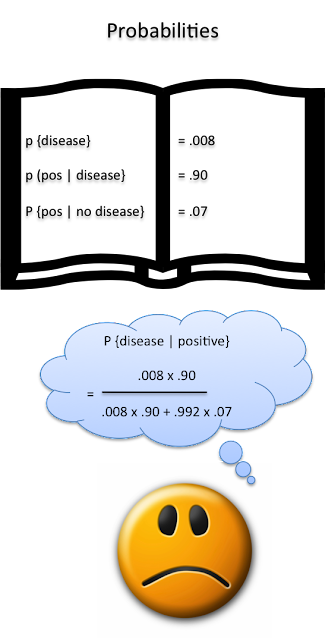 Using natural frequencies or presenting the same information in a tree based on actual numbers of people as shown below yields the same result but is much easier for us to calculate the correct answer. 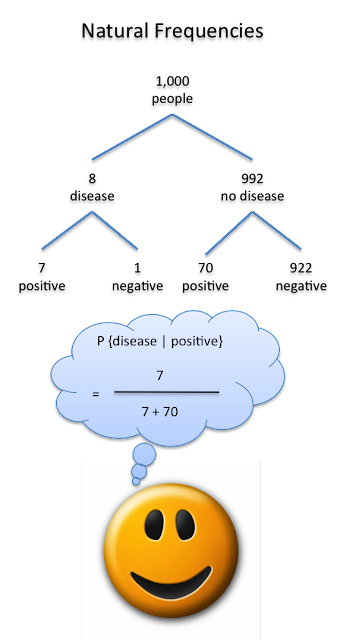 The significance of this information for low risk individuals should not be underestimated.  Countless people have endured traumatic psychological stress, lost jobs, separated from spouses, participated in unprotected sex with HIV positive persons or committed suicide as a result of false positive tests.  By 1987 for example, 22 blood donors in Florida had committed suicide after being told that they were HIV positive.   An analysis of these cases many years later concluded that the chances were at most only 50-50 that these individual were actually infected. [v]   The downstream impacts of poor risk communication are not confined to the recipients of the communication either. The potential for legal action against Doctors or government agencies is just one example of a potential cascading spiral of risk begetting risk.

It’s worth noting that for men in high-risk categories (homosexual men or IV drug users for example) with a base rate of 1.5% HIV infection, the chance of a false positive is less than 1 percent.  In a group of 10,000 homosexual men we would expect about 150 to be HIV positive and with practical certainty they will all test positive.  Of the 9,850 who are HIV negative, it is likely that 1 would test positive.  The chance therefore of this person receiving a false positive is therefore 1 in 151 or less than 1 percent.

As you can see from the example above, the way in which we communicate risk can  have a significant impact. Risk communication can of itself, introduce considerable risks where none existed if it is not carefully considered.  The problem of inappropriate risk communication is by no means rare but it is relatively easily addressed. An example of how the above information could be better communicated would be to provide patients and counselors with the same information presented in terms of natural frequencies as outlined below. [vi]

"Depending on the exact procedure used, an HIV test is likely to be positive for about 998 of 1,000 people infected with HIV. About 1 in 10,000 persons will generate a false positive result. False positives can be reduced by repeated testing using different methods but not completely eliminated as certain medical conditions and laboratory errors can still generate false positives. About 1 in 10,000 heterosexual men with low-risk behavior are infected with HIV. Of those 10,000 low-risk men, one is likely to be infected and will almost certainly test positive (99.8% likelihood). Of the 9,999 non-infected men, 1 will also test positive. Thus we expect that out of 2 men who test positive, only 1 has HIV. This is the situation you would be in if you were to test positive and are in a low-risk group. Your chance of having the virus would be about 1 in 2". [vii].

It should go without saying by now that for persons with no known risk behaviors, a second HIV test should be conducted before confirming the positive diagnosis but how would you know this unless the risks are adequately communicated.